Warning: Parameter 2 to wp_hide_post_Public::query_posts_join() expected to be a reference, value given in /home/customer/www/faceandfitness.com/public_html/wp-includes/class-wp-hook.php on line 308
 Fashion Week: What’s New In Style? – Face & Fitness 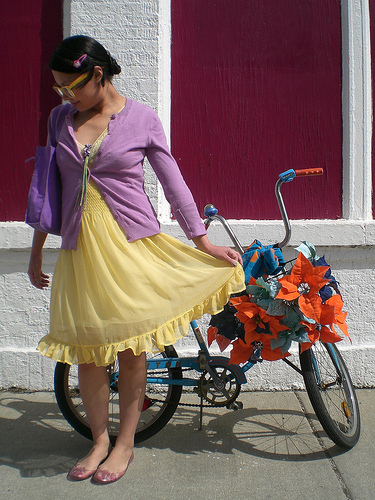 In honor of New York Fashion Week — which is going on without me!! — I’m dedicating this post to everything that’s hot and new in the world of style.

Whoops, did I say “hot and new”? I meant “chic, affordable and tailored for super-busy women.” I mean, I have a job and a budget, you know!

Let’s start with the Jennifer Lopez collection, which debuted at Kohl’s this week. We previously discussed J.Lo in my homage to celebs over 40 with gorgeous skin. In case you didn’t think that J.Lo could do it all — sing, dance, host a TV show, look amazing over 40, straddle two cultures, perform in two languages, and have perfect hair — she’s now added “designer” to her resume.

Her collection features everything from office-wear black pants and silk blouses to party-wear spike heels. Oh, and if you’re not interested in clothes (who doesn’t love clothes?), she’s also designs homewares.

Sheesh! Makes me tired just thinking about it.

Read more: What is Style?

Designer Tory Burch, who like me is also a gazpacho fan, is running her first crew of models down the catwalk this week. Her looks are very “1920’s France,” inspired by the seaside (um, hello? Tory, didn’t anyone tell you we’re heading into winter?)

Yet despite the seasonal confusion, her display during Fashion Week — filled with pleats and polka-dots — “confirmed her status as a solid player instead of an up-and-comer,” quipped one Associated Press reviewer.

Read more about those 1920’s seaside colors: What does your nail polish say about you?

Betsey Johnson Does a Cartwheel

I just heard about this woman, and I already love her: only one year shy of turning 70, Betsey Johnson is a staple at New York Fashion Week for flipping a cartwheel on the runway.

Apparently, this septugenarian’s cartwheels are so famous that Betsey is expected to spin one each year.

Her daughter Lulu (I love that name!) is the first model to strut the runway in Betsey’s collections …. well, okay, the second model. The first are her tiny little grandkids, with pink-streaked hair, who are still at that age that’s “cute” rather than “sultry.”

And her designs? A combination of frilly prom dresses and skull-and-crossbone motifs. How daring. How awesome. I don’t know who Betsey Johnson is, but she rocks. (Oh yeah, that’s her dress design in the photo).

With the exception of J.Lo’s new clothing line at Kohl’s, the prices of all these outfits is higher than I could pay! But — ah — I can dream, can’t I?